Новини
ENGLISH |
FROM MINE TO COURT. RESULTS OF THE 1.5-month protest at KZRK
Сьогоднішня дата 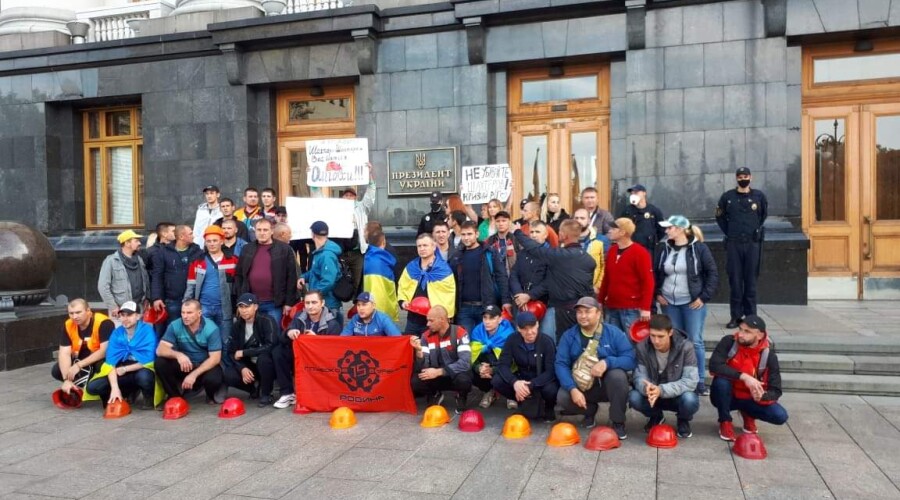 FROM MINE TO COURT. RESULTS OF THE 1.5-month protest at KZRK

On October 15, 2020, the underground miners' protest at the public company "Kryvbaszalizrudkom"(KZRK) finished with the signing of an agreement. Miners' families and comrades in solidarity all over the world breathed a sigh of relief. However, the hopes to quickly solve the dispute turned out false — the KZRK administration took the protesters to court. The next trial is on November the 18th. From now on, the fight will continue via different methods on the ground. The aim is to make the enterprise administration fulfill their commitments and to stand up to their claims against the miners in court.

Labor conflict at the public company “Kryvyi Rih Iron Ore Plant” (Kryvyy Rih city, Ukraine) has become one of the largest and longest-lasting workers protests for the improvement of working conditions and for a just attitude from management. At one point, all four mines of the enterprise stopped due to miners staying underground. Around 400 miners were underground, with hundreds of people participating in above-ground protest demonstrations. Miners’ relatives and coworkers spent several weeks in Kyiv right on the street near the parliament building. Late at night on October 15, workers of the Oktiabrska mine went up to the surface – they had been staying underground for the longest – since September 3, 2020 (43 days in total). Workers complain about swollen legs, high blood pressure and worsened mental well-being. Yet, the story which demanded heroic efforts and costed many their health is not over. Workers have united around demanding decent wages, safety at work, keeping benefits for dangerous working conditions, change of the incompetent management, along with a guarantee of non-persecution and compensation for the time spent underground.

Miners’ protest is over. Off we go?

Now is the time for miners to unite since the employer is going to do everything to break solidarity, sow discord between brigades, particular specialists and unions and blame the most active workers rights advocates. At this time, it’s important for workers not to lose the unions’ protection. Especially now it’s important to unite and stand up for decent working conditions for ourselves and our co-workers, in order not to be forced to go abroad tomorrow, leaving our small children and elder parents here.

Before signing the reconciliation agreement, the KZRK administration recognized the right to keep benefits for working in dangerous conditions. The employer promises that according to the evaluation results, ten professions will keep benefits (longer vacations, shortened shifts, early retirement). However, it is unclear if the latter concerns all of the people working underground and encountering other dangerous workplace conditions. Besides, the demands to strengthen production safety and provide workers with equipment properly are partially being fulfilled at certain mines. This was partially facilitated by the State labor service’s inspection that found 190 breaches of the labor protection legislation.

On October 15, the workers and the plant administration signed the reconciliation agreement, but some of its conditions are unclear, so workers should pay maximum attention to remain vigilant. The text includes such points:

(1) Wages raise: 38% for on-the-ground professions and underground workers who had low wages, and 21% for underground workers. A month after the agreement has been signed, the wages situation is not stable and workers need to individually discuss compensation with their management.

(2) Compensation for the time of the protest. Workers who stayed underground after their shifts are supposed to receive material support according to their official claims and medical conclusions. It means that miners need to contact their employer individually and hope to have this problem solved to their advantage. The employer did not undertake to compensate for the forced delay at the average wage rate.

Managers promise not to initiate administrative or criminal action against protesters, and not to hold the plant’s workers criminally, administratively, disciplinarily or materially responsible. However, the plant administration did not withdraw the civil lawsuit they had filed before. Two parts of the trial took place, and the next one is taking place on November 18. At the last hearing, on November 6, the plant administration representative tried to remove the workers’ supporters from the courtroom but had no luck. Other news from the last hearing is that a lawsuit was filed against 10 workers (there were 400 protesters in total) due to their online statements and coverage of the protest.

The claimant demands are:

1. To recognize the strike as illegal.

2. To recognize the protesters’ actions as illegal.

3. To make the defendants stop the strike.

4. To make the defendants stop “the illegal intrusion to the mine workings.”

5. To make the defendants pay the court fees.

The workers themselves never called their peaceful protest a strike, and the agreement signed by them and the plant administration does not qualify these actions as a strike. The legal claim violates the agreement and is irrelevant since the protest is now over. The Ukrainian constitution guarantees the right to peaceful gatherings, and the law does not define a list of designated places for such actions. On the other hand, workers have the right not to fulfill their duties in case of working conditions the endanger their health or life.

Kryvbas miners are an example for the working class

Members of “Sotsialnyy rukh” (Social movement) have been supporting the protests in Kryvyy Rih with their participation,informational campaign and legal advice. Miners are glad to receive broad international support due to publications at Labour Start. Left activists from all over the world showed their solidarity with Ukrainian miners. However, neither the President of Ukraine, nor the Commissioner for human rights in the Ukrainian parliament reacted to appeals from the people of Kryvyy Rih.

Concessions that the oligarch owners had to make should become an example to workers at other enterprises. A wave of spontaneous strikes spread across other regions of Ukraine: medical workers, coal miners, railway workers, mechanical engineers and metallurgists stood up. Railway workers of Kryvyy Rih supported their comrades in mines directly by the “work-according-to-instructions” action. More and more often, workers’ demands to oligarchs who own the business imply that the labor collective cannot be robbed any more and neither can robbed the country be robbed through the offshore arrangements. This can only be fulfilled by the actions of the working class in solidarity, which the workers of Kryvyy Rih have demonstrated in practice once again.