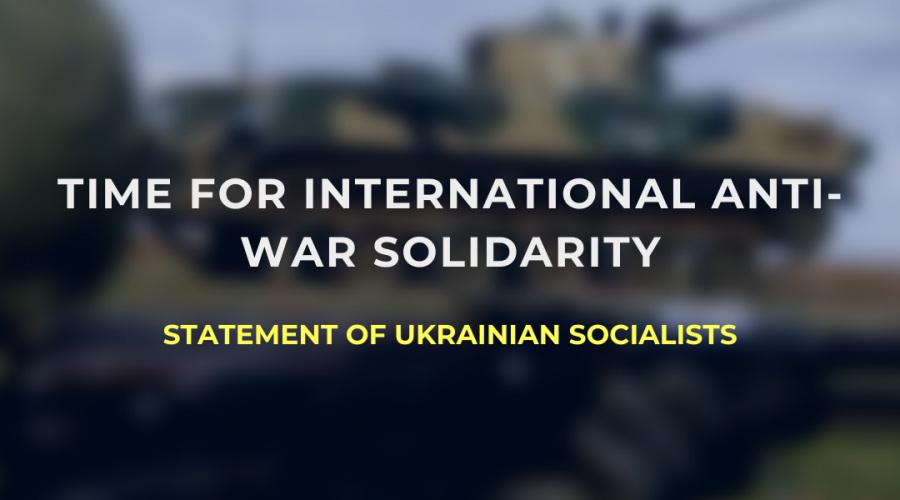 The Kremlin has ordered the Russian army to the Ukrainian borders and is threatening to intervene if the US, NATO, and Ukraine do not fulfill its demands. We, the Ukrainian socialists, call on the international left to condemn the imperialist policies of the Russian government and to show solidarity with people who have suffered from the war that has lasted almost eight years and who may suffer from a new one. In this address, "Social Movement" exposes the phenomenon of the revival of Russian imperialism, describes the situation in Donbas, and proposes steps to ensure peace

The Kremlin has ordered the Russian army to the Ukrainian borders and is threatening to intervene if the US, NATO, and Ukraine do not fulfill its demands. We, the Ukrainian socialists, call on the international left to condemn the imperialist policies of the Russian government and to show solidarity with people who have suffered from the war that has lasted almost eight years and who may suffer from a new one.

The resurrection of Russian imperialism


After the collapse of the USSR, only one superpower remained in the world – the United States. But nothing lasts forever and now its hegemony is declining. US interventions in Afghanistan and Iraq brought catastrophic wars to the peoples of these countries and ended in disgrace for the United States. Unfortunately, the decline of American imperialism has been accompanied not by the emergence of a more democratic world order, but by the rise of other imperialist predators, fundamentalist and nationalist movements. Under these circumstances, the international left, accustomed to fighting only against Western imperialism, should reconsider its strategy.

In recent decades, there has been a revival of Russian imperialism, which is now trying to get the US to redistribute spheres of influence in the world. The facts show that falling into the sphere of influence of Putin’s Russia does not bring any good to the people. Right now, Russian troops are in Kazakhstan with the aim of forcefully suppressing the popular uprising. These actions confirm the reactionary nature of the CSTO, which was created not to protect countries from external aggression, but to strengthen the influence of the Kremlin and to protect unpopular regimes from revolutions. De facto Russian troops in Kazakhstan also protect the interests of both American and British capitalists, who own a significant part of the oil industry in Kazakhstan.

Russia has played a similar role in the Belarusian protests. The Kremlin sent its propagandists to replace the striking media workers and announced the formation of a reserve of security officials to be sent to Belarus. Just like in the 19th century, when the Russian Empire was the gendarme of Europe, the Putin regime is now becoming the roadblock of social and political changes in the post-Soviet space – any social movement in this territory is forced to think about how not to become an irritant for the Kremlin.

We express our gratitude and solidarity to the Russian left-wing activists who oppose the imperialist policies of the Kremlin and who are fighting for democratic and social transformations in their country. Only a revolution in Russia and the overthrow of the Putin regime can bring stability, peace and security to post-Soviet countries.

The situation in Donbas

The Kremlin accuses the Ukrainian authorities of planning a military offensive in Donbas, but that is a blatant lie. Zelenskiy’s policy indicates that after multiple unsuccessful attempts to achieve peace after coming to power, he has abandoned plans to change something in Donbas. We condemn the neoliberal and nationalist policies of the Ukrainian authorities, but they in no way justify the imperialist aggression of Russia.

Russia constantly accuses Ukraine of not fulfilling the political part of the Minsk agreements, but it itself constantly violates the security part of them. The latest example was the non-continuation by Russia of the mandate of the OSCE mission to monitor the Ukrainian-Russian border, although it is provided for in paragraph 4 of the Minsk Protocol. On the part of the self-proclaimed republics controlled by the Kremlin, there were always incomparably more restrictions on the freedom of movement of representatives of the OSCE mission on the contact line, but despite these obstacles, the OSCE in recent years has recorded many times more violations of the conditions for the withdrawal of heavy weapons from the front line precisely by the “DPR” and “LPR”. But the main thing is clause 10 of Minsk-2, which was never implemented: “The withdrawal of all foreign armed formations, military equipment, as well as mercenaries from the territory of Ukraine under the supervision of the OSCE. Disarmament of all illegal groups”. There were and there are Russian troops in Donbas, but the Kremlin still hypocritically denies this.

Contrary to the myth, which is popular among some Western leftists, the regimes in the “DPR” and “LPR” are not the result of popular will. The heads of the “DPR” and “LPR” are integrated into the ranks of the ruling elite of the Russian Federation and have become the mouthpiece of the Kremlin’s most aggressive predatory sentiments. In the “republics” themselves, any opposition political activity, even the most loyal to the Russian government, is suppressed.

At the same time, the territories of the “republics” are rapidly de-industrialized. Infrastructure is deteriorating, and public transport networks are being dismantled in cities. Even for enterprises whose products are exported through the Russian Federation, multi-month wage arrears have become the norm. Workers’ protests culminate in the kidnapping of activists and the introduction of military vehicles.

In addition, Donbas has already become a zone of environmental collapse. Many mines are closed without proper conservation measures, which has resulted in the contamination of drinking water. According to the UN estimates, Donbas, while being one of the most densely populated parts of Ukraine, is the area which is filled with the most landmines in the whole world.

What is to be done?

Now the Kremlin denies the subjectivity of Ukraine and the possibility of direct negotiations between Russia and Ukraine. The Russian government wants to agree on everything with the United States, while completely discarding Ukraine. But the decision to resolve the conflict should be made while taking into account the views of people whose lives directly depend on the conflict and the way it will be resolved. Ukraine should not become a bargaining chip in the agreements between the two imperialist states.

We strive for a peaceful, neutral Ukraine, but for this the Kremlin must end its aggressive imperialist policy, and Ukraine must be provided with security guarantees more serious than the Budapest Memorandum, blatantly trampled by the Russian Federation in 2014.

Not harboring illusions about the policy of Western governments serving big capital and their own goals, we believe that the interests of the Ukrainian working people can be taken into account by them only under the pressure of progressive movements and the public of these countries.

First of all, it is necessary to finally end the fighting in Donbas and prevent possible provocations on the front line of armed conflict, which can be used as a pretext for a new intervention. Therefore, the first step should be the introduction of a UN peacekeeping contingent in Donbas. We are aware of the problems with existing peacekeeping missions and remember that sometimes blue helmets did not prevent massive violence. But under the current Ukrainian circumstances, this is a necessary forced step.

The issues of a long-term political settlement of the conflict should be resolved only after the security issues are resolved. The end of hostilities should reduce the severity of the conflict and after that it will be easier to discuss possible compromises. The conditions for future reintegration must also be prepared.

The next steps should be:

• The complete withdrawal of Russian troops from Donbas. One of the best means of pressure on the leaders of the Russian Federation would be the seizure of the property and assets of Russian oligarchs and officials in London and other places.

• Creation of an international program for the restoration of the war-affected region and assistance to its inhabitants (including through the confiscation of what was plundered by Russian and Ukrainian oligarchs).

• Revision of the socio-economic course proposed to Ukraine by the West: instead of destructive neoliberal reforms under the pressure of the IMF – the cancellation of Ukraine’s external debt.

• Provision of guarantees for the observance of human rights for those who lived in the “DPR” and “LPR”, the adoption of an amnesty law for those who did not commit war crimes.

The war in Donbas has claimed the lives of thousands and forced millions of people to leave their homes. The threat of escalation hangs over Ukraine like the sword of Damocles and greatly narrows the scope of progressive politics. The future of the socialist movement in Ukraine depends on international solidarity.