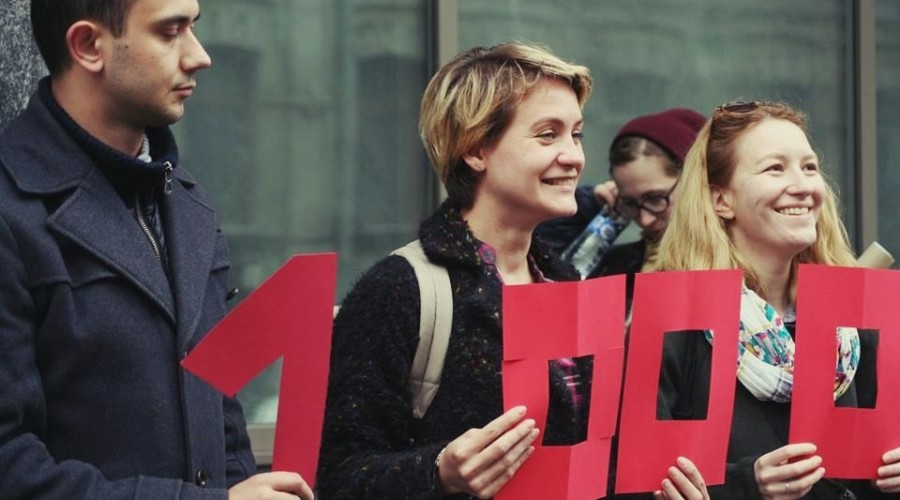 ‘Sotsialnyi Rukh’: who we are?

Sotsіalniy Rukh (SR; The Social Movement) is a new left party being created by the working people of Ukraine

Recent events here have shown the lack of political subjectivity of working classes in the country and the need for a left-wing political force which would promote a socially oriented agenda. During the 2013-2014 Maidan protests, a group of Ukrainian leftist activists had proclaimed “The Ten Points” of anti-capitalist and pro-labour demands countering the conservative nationalist and liberal mainstream. It went on establishing the Assembly of Social Revolution in 2014. The name itself implied that we believe the problems behind the numerous Ukrainian protests of last decades (poverty, striking inequality, social injustice, lack of democracy, corruption and vested interests in politics, police violence, and attacks on civil and social rights) could be solved only by a genuine social revolution – namely, replacing the existing system of oligarchic capitalism with democratic socialism.

The Assembly was an attempt to bring together activists of various socialist and anti-Stalinist communist currents and politicing youth; its representatives took part in the local elections, but its main task was the development of extra-parliamentary left-wing politics, thus laying the foundation for the organizing committee of the new party, called the Social Movement, and the eponymous NGO. The founding congress of the party was held in November 2016, and collecting of 10,000 signatures required by law to register the party is now under way.

The key branch of the organization is in the labour heart of Ukraine – the city of Kryvyi Rih (Krivoy Rog). In addition to another significant section in the capital of Kyiv, we are building organizations in other regions as well. Unlike all existing parties of Ukraine which are merely various oligarchic projects, Sotsіalniy Rukh is a grassroots democratic political force with a collective leadership and no single capitalist or establishment polician in its ranks. Instead, there are miners, steelworkers, teachers, academicians, students, nurses, transportation and construction workers, engineers, IT pros, artists, and journalists; youth constitutes the majority of membership.

Most of us are involved in independent trade union movement, including the Independent Trade Union of Miners, the Free Trade Union of Railway Workers (parts of the Confederation of Free Trade Unions of Ukraine), and some militant factions of Federation of Trade Unions (our activists were among the organizers of the Construction and Building Materials Workers’ Union and helped to establish its offshoot, the Crane Operators’ Union). Some members have been active in different leftist organizations (Organization of Marxists, socialist organization “Left Opposition”, student union “Direct Action”, Social Alternative, etc.); for others, Sotsіalniy Rukh delievered the first experience of political participation. Besides workers’ unions, Sotsіalniy Rukh activists have extensive experience in various social movements: student, human rights, feminist, ecological, anti-fascist / anti-racist, LGBTQ+, and others. 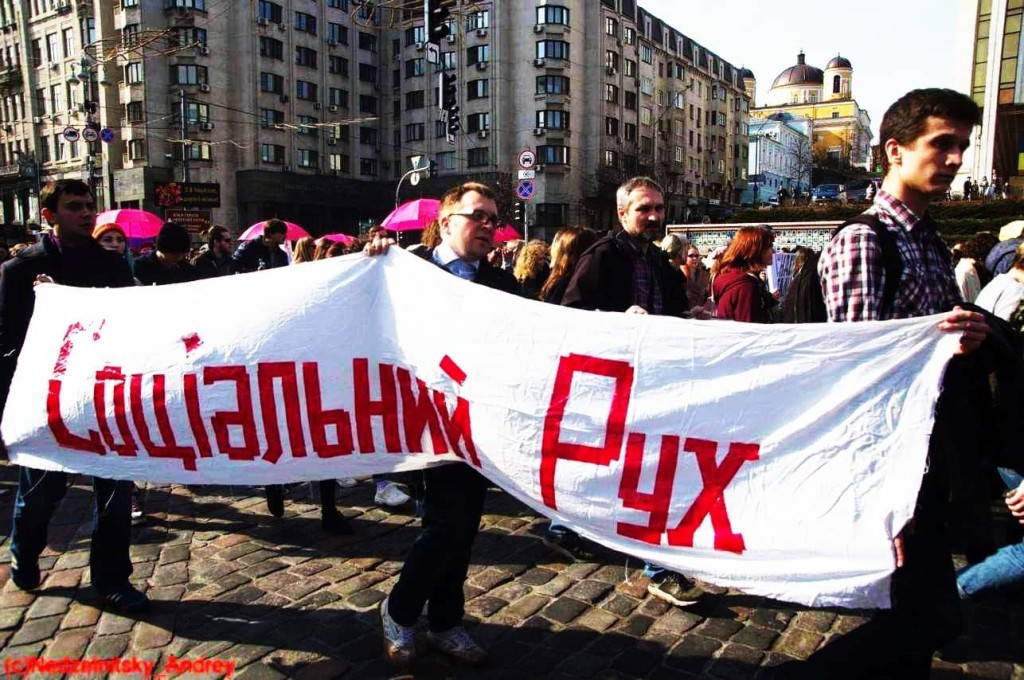 Sotsіalniy Rukh supports the struggles and operates within millieus of workers in industry (ranging from mining or missile factories to food industry), healthcare, education, science, IT, and trade alike. We actively opposed the government’s IMF-enhanced austerity policies, cuts and closures of budgetary institutions.

In 2016, for instance, we participated in the protest march of the physicians from the town of Romny who completed, together with our activists, 350 kilometers on foot to the capital after their clinic had been closed town, as dozens of others throughout the country. The neoliberal policy of the government which considered the idea of ​​the complete abolition of scholarship stipends was faced by protest of left-wing youth, including SR activists, who responded by pieing the architect of this “reform” from the finance ministry.

Sotsialniy Rukh also actively participated in the struggles of transportation workers in Kyiv, especially the trolleybus drivers at Kurenivske depot. When their union was under harsh pressure from the management, we helped them to gain international support, say from left-wing UK MPs (via LabourStart and the socialist Ukraine Solidarity Campaign).

In 2017, Sotsialniy Rukh assisted the spontaneous wave of Kryvyi Rih workers’ strikes and protests demanding increase of their wages to a descent level of €1000. The protests resumed in 2018, triggered by work-to-rule actions by the railroad workers, and leading to a major class conflict at Ukraine’s biggest factory, the multinational-owned steelworks ArcelorMittal Kryvyi Rih. The struggle there continues, and SR activists from other places picked the city for 2018 and 2019 May Day rallies to manifest our solidarity.

Comrades from our organization also provided them a comprehensive research of offshoring: how much profit in Ukraine’s iron ore exports is shifted to tax havens by the oligarchs and corporations. This research paper was the first common project of an initiative group where Sotsіalniy Rukh and its internal Platform Start cooperated with other progressive organizations, such as SD Platform and Respublika.

Sotsialniy Rukh is a close ally of the grassroots social movement of healthcare workers launched in 2019 as a flashmob #BeLikeNina by a nurse (and a single mother) raising the issue of their labour rights. Now, its social media group comprises tens of thousands of people working in the medical field, and they’ve registered as an official NGO with the help of Sotsialniy Rukh members. In general, care work and school education have been among the lowest-paying and most gendered sectors, and our activists promote corresponding socialist feminist agenda in the women movement, gender rights events and 8 March demos, along with combating important issues like domestic violence and conservative backlash. In formation of SR governing bodies, special attention is paid to women participation. 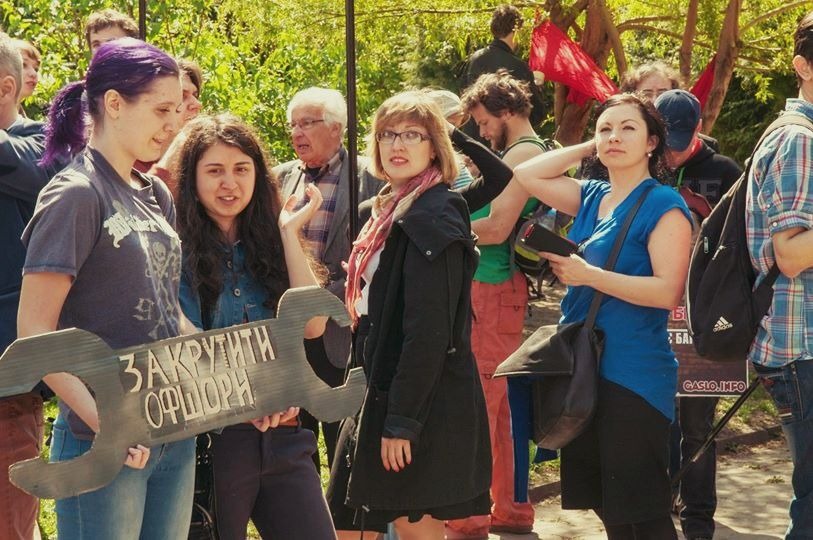 By supporting the environmentalist and climate justice movements, we propose an anti-capitalist and eco-socialist perspective. Another important aspect of the Social Movement activities is “pirate” politics: the struggle for free information and intellectual property rights reform. By the efforts of our comrades, open accounting was first introduced in Ukraine in n the Ministry of Education and Science. Decisions-making process in the SR involves the use of e-democracy mechanisms.

Sotsіalniy Rukh conducts different educational and cultural activities throughout the country: lectures on various topics of domestic and international politics, political theory and practice (capitalism and the labour theory of value, labour rights and the labour movement, the problem of offshore companies, experience of the international Left: the rise and fall of SYRIZA, Jeremy Corbin’s and Bernie Sanders’ campaigns, prospects of Podemos and the Catalan independence movement, Latin America’s pink tide and the right-wing reaction etc.); a course on history of Ukrainian socialist movements and ideas; workers’ schools; film screenings; presentations of books involving our authors (like The Future Without Capitalism and Left-Wing Europe, an account of European leftist parties and movements), left-wing intellectual magazine Commons: Journal of Social Criticism, studies by Center for Social and Labour Research (e.g. on controversial economic effects of the Free Trade Agreement with the EU, precarious labour conditions, or on social and economic alternatives to neoliberal capitalism in Ukraine and globally).

In general, we held dozens of education programs and street actions every year, with thousands of Facebook posts at our page facebook.com/social.ruh/ and regular articles at our web site https://rev.org.ua/.

The Social Movement activists have repeately faced violence both from the employers’ mercenaries and from the nationalist far right. For example, right-wingers repeatedly attacked or tried to disrupt the anti-fascist rallies in memory of Stanislav Markelov and Anastasia Baburova, leftist activists who fell victims of Russian neo-Nazis, or the presentations of Leon Trotsky’s works collection in Ukrainian. Of course, we’re confronting the atmosphere of systematic far right violence and impunity fueled by the ongoing war, the imperialist aspirations of Putin’s regime, national conservative hegemony in ideology, ultranationalist and anti-communist hysteria, and regular violations of human rights and freedoms by the state.

Certainly, there’s urgent need for us and for the entire Ukrainian society in ending the war in Donbas and achieving peace. This goal requires uniting the working class all over different parts of Ukraine. We offer defending our common class interests against the Ukrainian, Russian and Western capitalists rather than geopolitical nonsence and artificial separation by competing nationalisms and imperialisms.

In this case, as in the struggle for a socialist, democratic and humanistic alternative in general, the solidarity of our comrades and friends with the same views in Europe and worldwide is quite important for the Social Movement.