Новини
ENGLISH |
No to corporate dictatorship! May Day returns to cities in Ukraine
Сьогоднішня дата 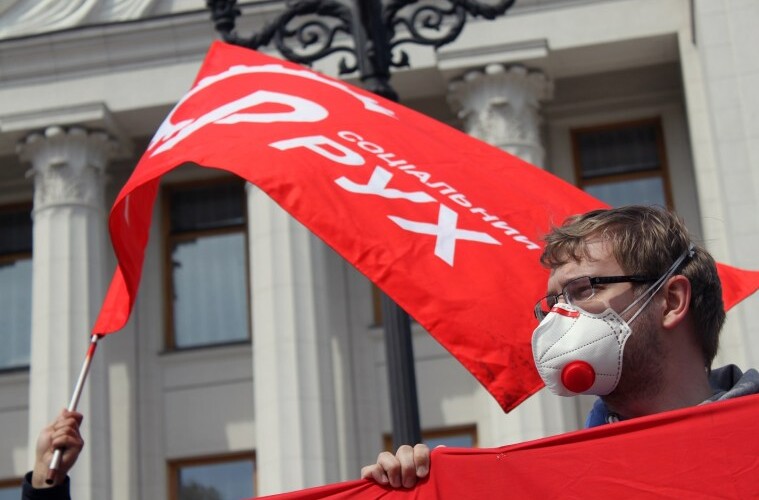 No to corporate dictatorship! May Day returns to cities in Ukraine

The international day of workers' solidarity was marked in the biggest cities of Ukraine, returning it to its social-liberating meaning. The slogan of the rally in Kyiv in front of the parliament’s walls was “No to corporate dictatorship! Decent labour for Ukraine!”. Activists’re enraged that in addition to the existing employers’ all-powerful authority, the government looks forward to further curtail the rights of workers who are suffering under the conditions of the pandemic. The improvement of life will not be brought about by top-down reforms but through collective action, like the struggles of the healthcare workers or the workers of the Kryvyi Rih iron ore plant

On the 1st of May 2021 near 50 representatives of trade unions together with leftist and anarchist youth came to protest at the Verkhovna Rada, Ukraine’s parliament. The place was chosen with a purpose: instead of fighting the coronavirus pandemic, the Rada is enhancing its own “pandemic of reforms”. Nevertheless, the participants did not demand anything of the Verkhovna Rada because it is infected with the virus of neoliberalism: in all the parliamentary party factions, one can find supporters of the idea that capitalism should be saved at the expense of the working-class majority. In today’s conjuncture, the only way to improve life is through solidarity actions.

The participants of the protest meeting held a banner which said “No to corporate dictatorship! Decent labour for Ukraine!” and called for solidarity with workers’ collectives which are fighting for better pay on their workplaces (“1000 euros for the workers of Kryvyi Rih”), or demanded an improvement in the labour conditions for all working people (“6 hours, 4 days – these are labour demands”). A whole series of placards were about the dangers of the new labour reforms (in particular Bill no 5371 on the simplification of labour relations, Bill No 5388 on the deregulation of labour relations and Bill No 5161 on contracts for unfixed working hours or ‘zero-hour contracts’).

Power to the workers, then life will improve
Let the elite pay for medication and education!
Oligarchs-parasites are not allowing us to live freely!
Dignified work without discrimination!
Freedom! Equality! Global solidarity!
Peace to the huts, War to the palaces!
Socialism works without crises

The leader of the Council of the Social Movement (Sotsialnyi Rukh) political organization, Vitaliy Dudin, declared that there are two aspects to the uniqueness of the event. Firstly, May Day is widely considered just another day of rest in Ukraine, but this protest reminds that it should be recognised as a day of struggle, an occasion to fight for the improvement of labour conditions. Secondly, the event allows one to summarize the fallout of the “market reforms” over the last 30 years: despite hopes for a better life, they have led to the impoverishment of workers and to oligarchs usurping even more wealth. The wealthy ones would like to preserve the current situation and prevent workers from changing it. Artem Tidva, a trade union organiser and activist of the Social Movement, stated that the government is trying to discredit May Day, describing it as an “obsolete Soviet” holiday, although it actually came to us from the US and Europe. However, this Left-bashing “decommunization” hysteria cannot force the people to reject genuinely valuable things like the protective labour legislation and the idea of solidarity per se.

The feminist activist Nina Potarska talked about the situation of women during the pandemic. In line with research, it is the women who were the first to struggle as a result of the economic crisis. They’re more likely to lose their jobs, moreover women more often worked in the care labour. It has been repeatedly insisted that solidarity was needed with representatives of the nursing profession – which is mostly represented by women and whose work has been critically important during Covid 19 pandemic.

The leader of trade unions in construction, Vasyl Andreyev, talked about the fact that the curtailment of rights was not unique to Ukraine. The intention to destroy workers rights is observed throughout the world. “From Sweden to South Africa, from China to the United States – this problem more or less concerns everyone. That is why through international solidarity we can defeat this injustice!”, he remarked.

The anarchist participants talked about the repression of anti-authoritarian activists (in particular the Belarusian anarchists), and called for self-organisation and direct democracy. The well-known anarchist artist Davyd Chichkan recited lines from the poetry by Lesya Ukrainka, a major socialist and feminist figure in Ukrainian classic literature.

Particular support was expressed for the workers of the ArcelorMittal Kryvyi Rih iron ore plant who are once again engaged in resistance demanding 1000 euro-level wages from their corporate owners.

The rally was topped off by a vivid speech by the leader of the trade union of self-employed entrepreneurs and producers, Natalia Zemlianska, who demonstrated that even in such an extremely economically liberal country as the USA the leaders now are forced to express their support for trade unions and taxing the rich, whereas in Ukraine it’s the opposite.

Thus, with the collective efforts of the workers in health, construction, railways, public transport, mining etc. May Day regained its primary social-liberating purpose. The Kyivan May Day became an important event, because it allowed to highlight the real cause of injustice: the political and economic power of capitalists. The alternative to such an order is the transfer of power and wealth into the hands of the people, thus Socialism and direct democracy. Only collective pressure, collective actions, collective struggles will return what is owed to the workers.

The action in the capital was not the only one in Ukraine. There was a street picket in the centre of Odesa with slogans of “Workers go on strike, baristas – struggle” (the pun is lost in translation), “Power to labour not to capital”, “An increase in housing rents should result in an increase in wages”, etc.

The leftists in Dnipro, Zaporizhia and Lviv have marked May Day by graffiti and sticker campaigns.